Despite Jeremy Corbyn’s courageous fightback in the lead up to this election and a slim chance of victory, I suspect by the morning of June 9th the population of the UK will have walked bewilderingly into 5 more years of Tory rule. A further half-decade of class warfare in which the 1% will continue to beat the peasants into submission with their bonus cheques. We can expect more cuts to public services, further privatisaton of the NHS and ever widening inequality. Never fear, we will be saved by Theresa May as she has declared they will form a ‘strong and stable’ government. The question must be asked, for whom? Surely not the growing amount people who are now forced to use foodbanks just to get by. Certainly not the sick and disabled who have seen their benefits slashed, along with the unemployed. Theresa May I suspect won’t be fighting for larger families either, as families with more than 2 children saw their child tax credit payments reduced. It’s suddenly occurred to me, there is a theme, the most vulnerable in society are getting hit the hardest. This is not ‘strong and stable’, these are actions of a bully, who tend to recruit bigger more powerful accomplices to support them, such as big business and banking. This is exactly what the Tories have done, by consistently reducing corporation tax from 28% in 2010 to the current rate of 19%. The new government also vowed not to regulate the banking system, as the rest of the country recovered from the aftermath of the financial crash in 2008. This was repaid in kind and by 2010 the banking/finance sector funded over half of the Tory Party contributions. All the while the real people have been neglected, sections of society have been cast adrift through Tory reforms, commonly known as “cuts to services”. Although the term ‘austerity’ rarely gets mentioned in 2017, make no mistake it is still alive and well in the UK.

With all this mind, the question must be asked; why do people vote against their own interests? As a personal example I look at my Dad, an intelligent working class man from Manchester who votes Conservative and avidly reads the Daily Mail. What is going on with him and others like him? Of course there are probably a whole range of theories; aspirations, snobbery, family background, newspapers read, self interest and so on. Indeed when I apply these possible reasons to my Dad’s case, some of that fits. He was from a comfortable middle class family in Cheshire, he went to a grammar school, first job was at a stock brokers, he had shares he obtained from the BT sell-off while he worked there, he reads the Daily Fail, has a high intellect and yet worked as a mechanics assistant for decades. At this point it would be relatively easy to make rash judgements, however, I think there is more to this conundrum.

Many people have tried to look at why we make certain political decisions, from varying angles. Jonathan Haidt a Professor of Psychology at New York University suggests that we have six moral channels.

Haidt’s study was tested all over the world and led him to a startling observation. Left-wingers or liberals in US parlance have a propensity to use mainly two channels; care/harm and fairness/cheating. While right-wingers (conservatives) tend to use all 6 channels fairly equally, as noted below. Although the chart is a US study and from the older ‘5 channel model’, the results have been almost identical throughout the western world. 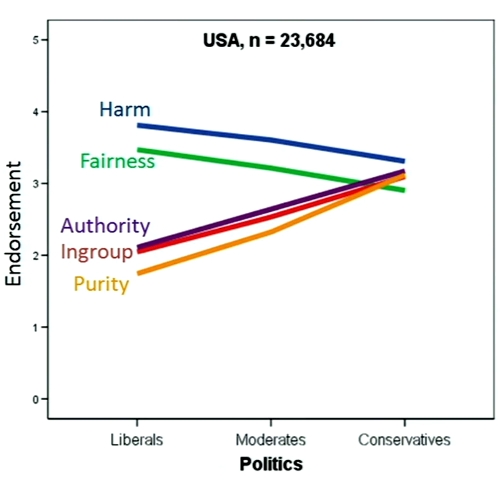 Haidt describes this disparity as eating the same item but using different taste buds. The result would be as if we’d experienced the same food exceptionally differently. Haidt continues, stating that right-wingers have a broader palate than lefties and suggests this may be why we of the left struggle to forge connections with voters. It’s possible this may explain why right wingers appeal to a larger audience. This is not in any way to suggest for example the Tories are morally correct, just that it may appeal to more people.

I have certain reservations with Jonathan Haidt’s work and this is most probably due to my bias as a socialist. Primarily he seems to assume that all six channels hold the same moral currency. When you look at another model called ‘Maslow’s hierarchy of needs’ some of Haidt’s channels are not on the same levels of the triangle. Maslow suggests you must fill one level before you move up and that life experiences can  impede progress.

If you look above many issues regarding the leftist channels of care/harm and fairness/cheating can be associated with needs on the bottom two levels. While it could be argued although quite fluid, the other 4 channels could be linked to the middle to upper levels of the chart. With my warped anarcho-syndicalist viewpoint, I would offer that with this in mind the left puts more emphasis morally on getting everybody to the basic levels of Maslow’s hierarchy and beyond. As Jeremy would say “nobody gets left behind”.

All this is well and good, but it doesn’t detract from the fact many people will be voting for Theresa May and against their own interests. Maybe we need to dig a little deeper to uncover a wee bit more. There have been a reasonably large amount of studies looking at brain differences using MRI’s, with interesting discoveries. It has been observed that the amygdala an almond shaped structure deep in the brain is generally enlarged in people who identify as conservatives. This is curious as the amygdala is a structure that is more active during states of fear and anxiety. On the flip side ‘lefties’ have more gray matter, in particular at the anterior cingulate cortex, this area helps people cope with complexity. 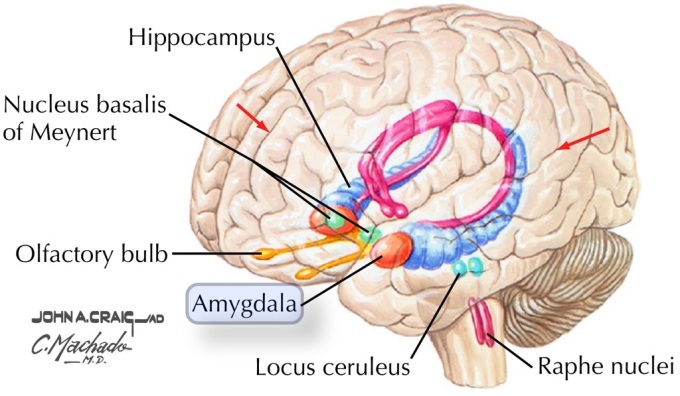 The nature versus nurture aspect of this has not been determined, but this finding possibly sheds some light on two politically very different specimens. Most societies are divided into a party that wants change such as Jeremy Corbyn’s Labour Party and one that is afraid of change Theresa May’s Conservatives. The leftist party is generally more intellectual and the right-wing party is more anti-intellectual. Right-wing parties put more emphasis on national defence, which magnifies our perception of threat, whether of foreign aggressors, immigrants, terrorists, or invading ideologies like Communism. So with all this in mind it is probably a good time to descend back to earth and decide where all this fits in to the current election cycle.

In recent weeks it has been noticeable that the Theresa May has presented herself as the protector of the UK following the attacks in London and Manchester. Remember this claim doesn’t have to be backed up by truth after all she is appealing to peoples emotions via fear. On the contrary you could present a strong (and stable) argument that Theresa May’s actions as both Home Secretary and the Prime Minister have made the UK more vulnerable. Saudi arms deals and 20,000 police being cut certainly wouldn’t strengthen the security of the nation. Simultaneously the right wing media have been on the attack accusing Corbyn of being a member of anything from the IRA to Take That. The goal of this media blitz is to manufacture a sense of danger, while presenting Corbyn as the incompetent and deceitful traitor. For this magic trick to work as you may have noticed, no truth is required, as long as it hits home at the voters receptive amygdala, mission accomplished. See exhibit A. 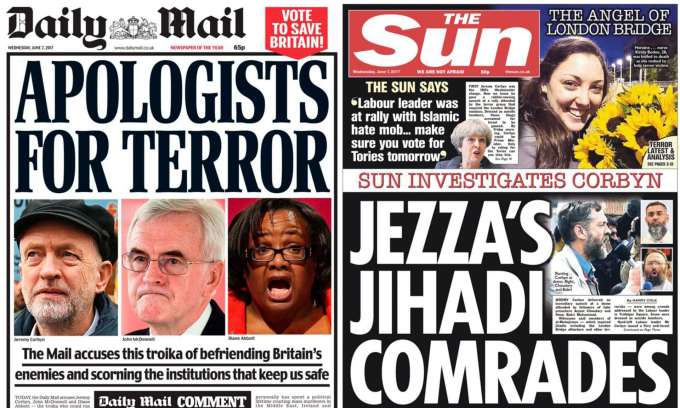 I’m sure you are aware when you are conversing with one of these zombies, rarely do they tell you why you should vote Conservative. In fact they tend to parrot the same bite size intellect free headlines as displayed above, whilst slagging off Jeremy Corbyn. This is why the Conservative Party can serve up a half baked manifesto with no costings and no real detail, because it doesn’t matter, this is not aimed at the critical thinker. It’s directed at someone who is scared of everything, who hates change and who picks “strong and stable” over “calm and logical”. Hopefully I will be proved wrong tonight by the nation and Jeremy gets elected. If so the party is at my place, although you’ll have to provide your own airfares to New Zealand. Sadly, however, I feel we may have to start culling the zombies. Lock and load, stay safe out there.